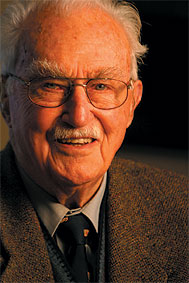 My commitment to Humanism can be explained by my family background and early experiences. My father was the son of a Baptist missionary in India. He was expected to follow in his father’s footsteps, but when he was studying at the University of London he found that he could no longer accept Christian doctrine. He became a secondary school teacher and a freethinker. He was teaching in Invercargill when he married my mother, a Presbyterian born in Dunedin who had little interest in the niceties of her church’s doctrine but saw religion as the sound basis for morality.

I was brought up in predominantly Presbyterian Invercargill. My early education in State schools gave me a sympathy for all manner of people, whatever their condition or religion, which, I hope, has never left me. My father was the only person whom I knew of in Invercargill who did not profess to be a Christian. He had become a kind of pantheist. He wrote a poem about his faith which included the following verse:

My father never restrained me from going to a variety of Sunday schools with young friends. He himself was well versed in the Bible. My mother conscientiously taught me to say prayers, but I soon gave up that practice. Occasionally I accompanied her to the church, which she did not attend very often herself.

As the range of my reading extended I became somewhat eclectic in my thinking. There was some freethought literature among my father’s books. I remember puzzling over a book in English about Schopenhauer and his philosophy. Later as a resident in Knox College I took the opportunity to read books on religious subjects in one of the libraries there. During my university student days when required to state my religious affiliation I would reply “Presbyterian” as that was the only denomination with which I had any connection, but I harboured doubts which often emerged in student discussions. In my French studies I elected to offer a special paper on French rationalism. It was probably my course in anthropology which led to my reading with great interest scientific and philosophical essays by Julian Huxley and J- B. S. Haldane. By the time I had left university I was an avowed freethinker.

In my twenty years of service in Africa, I learned something of the distinctive cultures of different races, but was impressed with the basic homogeneity of all humankind. I came to deplore the divisive effects of proselytizing religions on African societies already bedeviled by tribal differences, but I did recognise the benefits accruing from some of the philanthropic and educational work of the Christian missions. Returning to New Zealand and working in adult education under university auspices I enjoyed the climate of free discussion of philosophical, religious and other issues and was glad to see heterodox Lloyd Geering join the university staff as Professor of Religious Studies. In the 1960s I became a member of the NZ Rationalist Association but gave up my membership because I felt that at the time the association was not doing enough to develop and promote a philosophy of life that would help fulfil the needs of New Zealanders who had renounced traditional religions. I did appreciate, however, the good work done by the association in opposing the intrusion of religion into our secular institutions.

In 1956 1 had read a paper by Julian Huxley on Evolutionary Humanism which impressed me, but it was not until 1978 that I learned there was a Humanist Society in New Zealand. I made inquires and in due course joined the society. I now consider that I have been a Humanist for many years, although in the past I have usually described myself as a freethinker. Experiences of life, study and reflection have convinced me that there is no reason to believe that there is any supernatural power which controls human destiny nor that there is any life after death. I believe therefore that it behooves all men and woman during their lifetime to do there best by their own efforts and by cooperation with others to promote the welfare and happiness of humankind and to care for the natural world of which they are a part- True cooperation in such a cause calls for sympathy with others, tolerance in matters of opinion and abstinence from violence except in self-defence. As I see it, sympathy for others encompasses respect for individual freedom in so far as it does not infringe the freedom of other individuals.

I believe in these principles of behaviour, as indeed do manv New Zealanders, but I believe in them because they are based on human experience and rational thinking, but not on any belief in the direction of a supernatural power or in life after death- therefore I call myself a Humanist.