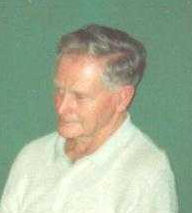 I was born, in 1916, in a smallish country town halfway between Arnhem and the German border. My father, the local notary public, was a widely read man, with an enquiring and philosophical mind. Although the son of a Lutheran minister, he rarely went to church, and like so many people, always chose Christmas, and especially New Year’s Eve for this.

My mother, a regular churchgoer, and member of the largest Protestant group in Holland which was generally fairly liberal, assumed the responsibility for the religious upbringing of our family. I often annoyed her by demanding exact answers for my many questions about things in the Bible, ever asking, “Is it true?” She always replied that there are many ways in which people express their ideas about what is true. (I felt then, and think now, that this is only half a ‘true’ answer!) My mother was always disturbed about the way the Protestant ministers, on 31 October, Martin Luther Day, hacked away at the Catholic Church. She was basically a bridge builder, looking for the best in all people, and she, too, was very widely read.

I retain memories of the many occasions when the church singing, with its difficult melodies for the hymns and psalms did not go well, with the organ frantically trying to pull the congregation along. Nevertheless, my mother, who was completely unmusical, found the communal singing a great participating experience. (All re-echoed for me in our efforts to do justice to our Humanist ‘Die Gedanken sind frei’ song.) Since experience and emotion, rather than philosophical contemplation, seem to dominate my personality, I can still relive, and thrill to, the wonderful sounds of the heavy church bells, on the day prior to the great church festivals, ringing for ten minutes at noon.

My career in the merchant navy brought me into contact with decidedly unreligious ways of thinking – although, today, I find the old royal navy rule that my naval college observed, of one minute’s silence before meals, a lot more commendable than our current prayers before Parliamentary sessions.

During World War Two, when German forces occupied the Netherlands for five years, the idea of a God became less and less relevant in my life – Yet I found that the churches and their people did great humanitarian work, helping to get food to the starving people in the west. As people of all persuasions participated in this humanitarian work, it became clear to me that religion had little to do with it all. There was a general response to the need to help in situations of utter misery.

Like hundreds of Dutch people I tried to escape the German occupation, (in a very small sailing dingy) caught by a storm, and spent two -years in a German prison. There I met some wonderful, and some awful, people – some very religious, and some athiestic. Although hard work and an empty stomach don?t encourage great thinking processes, I slowly came to see that God was not what I had earlier thought ‘He’ was. Near the end of my two years, when I was pretty low and the real war noises were coming horribly close, I somehow experienced a great feeling of mental quietness. Later on, when thinking again became possible, I realised that this state, which some would have associated with God, was my nature and body’s way of dealing with the situation.

Following my release, I slowly developed into a budding Humanist. From very close quarters I witnessed the revival of organised freethought in Holland, as a very small group of dedicated people, one of them my aunt, founded the Dutch Humanist.Society in 1946. For me, then, this movement was too intellectual and I took no part, as the job of rebuilding my own life was too demanding.

Since my immigration to New Zealand in 1952 I have watched the enormous progress made by Humanism in the Netherlands. It took tremendous effort and dedication against strong resistance, but Humanism there is now a universally respected lifestance, fully established in Dutch society alongside the churches in the various kinds of recognition given to them, in opportunities and funding.. I joined the Wellington Branch of The Zealand Humanist Society, as soon as I realised its existence, and continue to talk of our Humanist principles wherever I can, to increase awareness among the people I meet. I feel it will be a long while before Humanists here have anything like the impact that Humanists have in the Netherlands, and the situation is very different. But each time my lifestance is ignored or undervalued, I determine to go on pressing for freedom from religion, and our HSNZ is our best avenue through which to do this.

Willem (Bill) van Gorkom is a member of the Humanist Society in Taranaki and was formerly a Wellington member.