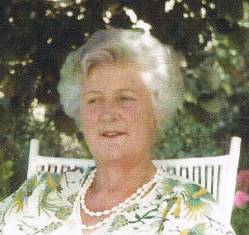 Jean, as she was known, was born into a well off family in Hampshire, England, the second child of Alfred and Lilly Vair-Turnbull. Her parents had met during the Great War in Marseilles where they were both ambulance drivers. Having grown up in Scotland, Alfred became a ship owner and later was appointed Consul for Holland. Her mother was a keen golfer and when they moved to Surrey their house backed onto the Wentworh golf course. Jean’s older brother Stanley John St John (1923-1992), known as John, was educated at Glenalmond College, Scotland. During World War Two he served in the RAF.

Jean’s parents followed their own busy lives and as was the custom she was brought up by a governess, whom she called Squibby, was extremely fond of and stayed in touch with all her life. She saw little of her parents. Summers were spent at the family lodge on Loch Rannoch in the Scottish Highlands where Jean was at her happiest having only her pony Taffy and her lamb Milly for company. She roamed the moors and walked around the loch with these faithful companions.

When Jean was eight years old her father died suddenly and life changed drastically. Due to death duties both houses (in Surrey and Loch Rannoch) were sold and her mother bought a modest house on the Sussex coast. At the age of twelve Jean left home to attend boarding school, The Warren, at Worthing, Sussex where she was very happy. Later she went to Heathfield School at Ascot, Surrey, which she did not enjoy. At school she excelled at languages studying Latin, German, Spanish and French, and Jean was offered a scholarship to Oxford.

With the war in progress since 1939 Jean gave up the idea of going to university, instead she decided to look for a job where she could apply her linguistic skill to the war effort. On her own initiative she went to the Foreign Office in London where she was given a cross word puzzle to complete after which she was offered a job. Returning a second time she was interviewed by MI6 and having signed the Official Secrets Act was told to be at Waterloo Station at a certain time under the clock where she would be met and taken to a secret destination for training. This appealed to her sense of adventure. By this route she entered the world of Bletchley Park, Buckinghamshire, when she was aged 18; for her the war would involve decoding and encoding secret intelligence messages.

Her MI6 work eventually saw her posted to Naples and later to Trieste, Italy. While there she met a Special Operations Executive (SOE) agent Captain Hugh Byrd who had spent much of the war in Yugoslavia working with Tito’s partisans. John Hugh Linley Byrd (1916-1977, always known as Dicky, and Jean were married in 1947. After their marriage, when they could talk about their war time experiences, Jean discovered that she had often decoded her husband’s messages.

They decided to make a life for themselves in Southern Rhodesia, now Zimbabwe. They were not happy living there and moved for a while to Tanzania and then on up to Kenya, where Dicky worked for the Colonial Service in the Agricultural Department until 1963, when independence was declared. Their children, Nicolette (Nicky) born in 1951 and Hugh born in 1954 went to boarding school in Kenya until 1963 when the family moved to the UK. Jean’s mother and brother had moved to Kenya in 1947. Her mother bought a farm where she lived with her sister and niece and her brother flew aircraft as a test pilot.

On their return to the UK Jean and Dicky bought a house in Devon where they lived until they moved to Portugal in 1968. Portugal appealed to them and they were very happy there until Dicky’s premature death in 1977. Jean decided to leave Portugal and was invited by some Kenya friends now in Tirau, New Zealand to visit them for a while.

Once in New Zealand she found her estranged brother John, who was living in Taupo virtually destitute; she helped him to get ‘back on his feet’ again with a new business. She bought a house in Cambridge where she lived happily for several years before moving for a brief period to Auckland. When she was back in the UK she visited friends in Cirencester in the Cotswolds who had a great friend of theirs staying from New Zealand, Jim Dakin (1908-2005). A retired professor of adult education and a widower, Jim had spent much of his early life working for the Colonial Administrative Service in British East Africa. He urged her to contact him during her forthcoming holiday to New Zealand and said he would like to show her the South Island.

Returning to New Zealand for a holiday Jean contacted Jim, who, true to his word, took her around the South Island, always her most favourite part of the country. They were married on 29 May 1993 by Jeanne van Gorkom, a Marriage Celebrant and President of the Humanist Society of New Zealand. For the next 12 years Jean and Jim lived happily in Wellington, Jean supported Jim in his activities within organised humanism and she also became a New Zealand citizen. Later she would ensure that his collections of material on secular education, adult education, and freethought were deposited in the Alexander Turnbull Library.

Following Jim’s death in 2005 Jean returned to the UK and lived in Sidmouth, Devon, for two years. She decided at this point that she needed to live where her memories of Jim were and she returned to New Zealand and lived at Eastbourne in Wellington. At the same time, her son, Hugh and his family moved from Malaysia to Auckland, so she later moved there to be nearer to him.

In 2012 Hugh took a job with an English university. Not wishing to leave his mother without any family in Auckland, it was agreed that she would return to the UK and live with her daughter and son-in-law in Wiltshire. She returned in December 2012 and enjoyed the period she spent in Wiltshire and the opportunity to get to know her grandchildren and visit old friends. Jean died suddenly from a heart attack on 16 September 2013. In accordance with her wishes a simple non-religious service was conducted by Hugh at the Kingsdown Crematorium Chapel, Swindon on 8 October 2013, where he explained Jean’s views:

Our mother expressly wished not to have a religious ceremony and she would have wanted you to know why ….. Today we pay our respects to her. It is her day and we should respect her views. Although she was born into the Catholic faith, she did not follow that calling and was a free-thinker throughout her life. She saw no evidence for the existence of a supernatural being and consequently, at death, saw no evidence of the separation of body and soul, no life-everlasting, no heaven, no hell and no ascendance. This is a courageous view to take as you can take no comfort in the concept of meeting somebody again after death in a better life and in a better place. Indeed it was this idea that she found most difficult for if one truly believes that there is a better place and a better life after death, then this life and this place are second best and treated accordingly. She saw the evidence of this in the way that mankind can cause destruction on each other and to this earth, all too often in the name of a god.
In her heart she had always been a Humanist. It was after meeting Jim that she learnt to intellectualise this.