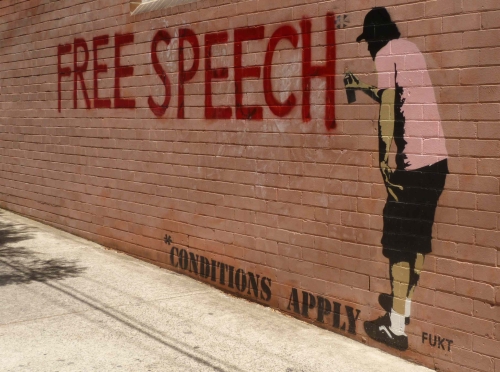 The Humanist Society of New Zealand and the New Zealand Association of Rationalists and Humanists are calling on politicians to repeal New Zealand’s Blasphemy Law. The terror attacks on Charlie Hebdo offices have highlighted the need to overtly emphasise the value that New Zealanders have for free thought and speech.

New Zealand’s anachronistic Blasphemy Law was adapted from the common law of the United Kingdom where it has since been abolished. This law has never resulted in a successful prosecution in New Zealand and the only attempt to use the law back in 1922 was unsuccessful. This law is a black mark against New Zealand in the International Humanist and Ethical Union (IHEU) annual report – Freedom of Thought: A Global Report on the Rights, Legal Status, and Discrimination against Humanists, Atheists and the Non-religious, qualifying New Zealand for the category of ‘Severe Discrimination’.

The violent response in Paris to the non-violent ideas expressed by the Charlie Hebdo magazine underscores that freedom of expression is a core ingredient of a democratic society. Mark Honeychurch, President of the Humanist Society of New Zealand, considers that repealing Section 123 of the Crimes Act would be “a symbolic gesture that sends a clear message that New Zealand values free speech. Given New Zealand now has a seat on the United Nations Security Council, repealing this relic of a law would give New Zealand the ability to criticise blasphemy laws in other countries without being seen as hypocritical.”

John Murphy, President of the New Zealand Association of Rationalists and Humanists, is critical of the special privilege that the law gives to religious ideas: “In an open and tolerant society, all ideas need to be able to be criticised and satirised. The law currently provides special protection for religious ideas and leaves the prosecution of such cases at the whim of the Attorney General of the day. We must not assume that future Attorneys General cannot be pressured into allowing prosecutions to proceed.”

Murphy states: “Given the recent acts of terrorism that are partly justified on the basis of blasphemy, it is time to remove this law from our statutes. Our human rights legislation already balances the right to free speech, against the need for freedom from discrimination and hate speech, and does so across all forms of belief, thus rendering the Blasphemy Law redundant.”

Murphy says: “As with other anachronistic sections of the 1961 Crimes Act, such as the sections (now repealed) that criminalized homosexual acts, the Blasphemy Law reflects prejudices and stigma that are largely consigned to a previous era and are now objectionable to the vast majority of New Zealanders.”

The Humanist Society of New Zealand (Inc) is an organisation that promotes humanist philosophy and ideals. It meets in Wellington with members throughout New Zealand, and is affiliated internationally to the IHEU and the United Nations Association of NZ.

The New Zealand Association of Rationalists and Humanists (Inc) is a not-for-profit organisation that exists to serve the interests of the non-religious: those who do not have a belief in gods or the supernatural.