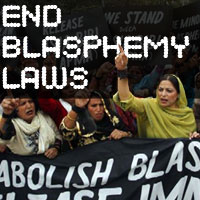 The Humanist Society of New Zealand is today among the founding partners heading a new, unified campaign for the abolition of “blasphemy” laws worldwide.

The End Blasphemy Laws campaign is being run by a new International Coalition Against Blasphemy Laws bringing together organizations that share the same goal: campaigning to repeal “blasphemy” and related laws worldwide.

In addition to the Humanist Society, the founding partners are European Humanist Federation (EHF) and Atheist Alliance International (AAI), along with a growing list list of national organizations, in particular those in countries like ours with extant “blasphemy” laws.

The campaign has three strategic goals:

Blasphemy out of “western” states: We want to see the remaining laws against blasphemy and religious insult in New Zealand, Canada and Europe repealed. Despite the clear international human rights consensus against blasphemy laws, there is an obvious double-standard at work when, for example, the European Union has taken a clear stand against blasphemy laws internationally, but some of its Members States cling on to existing anti-“blasphemy” legislation. It must be abolished, and although there’s no reason in principle that western states must repeal such laws first, there is a clear historical direction of travel, and by abolishing “blasphemy” in the “west”, promoting the international human rights consensus against “blasphemy” laws will become significantly more achievable. The case of kiwi Philip Blackwood who, along with two others, faces up to four years in a Myanmar jail for insulting Buddha, illustrates the importance of countries like New Zealand leading by example.

A mutually supporting and robust international network: We want to see all advocates for freedom of expression against “blasphemy” laws around the world networked together, supporting each other, including secular, religious and human rights groups, human rights lawyers and progressive lawmakers. Part of the problem of opposing “blasphemy” laws is that precisely where restrictions are most severe, advocates for free expression face the biggest challenges in speaking out. In Pakistan, calling for repeal of “blasphemy” laws has been declared “blasphemous”. In Saudi Arabia, for writing about unjust religious institutions you can be jailed and flogged. In Mauritania, criticising the religious justification of modern slavery has earned a blogger a death sentence. Those of us in the most hard hit parts of the world need the most help. As a coalition we aim to make the most of our shared contacts and memberships to connect and support groups and individuals around the world.

There’s more about how the campaign will operate on the website as well as the campaign launch announcement and a growing list of coalition partners.