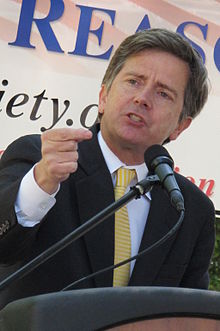 Sean Faircloth is an inspirational speaker and the author of Attack of the Theocrats! How the Religious Right Harms Us All – and What We Can Do About It published in 2012. An attorney, Sean served five terms in the Maine Legislature. In 2009 he became executive director of the Secular Coalition for America, advocating for separation of church and state, and for greater acceptance of nontheistic viewpoints in American life and in 2011 he became the Director of Strategy and Policy for the Richard Dawkins Foundation for Reason and Science. Sean warns that the religious right is “very orchestrated” and has internationalised its movement with some success in Australia and New Zealand. Sean is seeking to meet like minded people in this part of the world to promote rational thought and science based knowledge.

Read more about Sean Faircloth on the following pages. In Auckland, Wellington and Christchurch, Sean will be supported by prominent local speakers.

Other functions and chances to meet and speak with Sean are being arranged.

Places are limited so be certain that you book early. See report on page A7 of the Dominion Post, Monday 18 March.

Dinner with Sean Faircloth:
Saturday 13 April. James Cook Hotel, Wellington
After dinner speaker Clive Solomon
For more information and to register for the dinner contact Gaylene Middleton 04 232 4497
For further information, as it is posted visit www.reason.org.nz and www.humanist.org.nz

Tickets may be purchased at www.reason.org.nz

Copies of Sean Faircloth’s book Attack of the Theocrats! How the Religious Right Harms Us All – and What We Can Do About It 2012 will be for sale.

Places, times and other details subject to variation if required by demand or other circumstances.

Sean Faircloth: will be discussing religious bias in New Zealand, including the Education Bill and Charter Schools, comparing those issues with the United States and putting that in the context of an international secular movement. He is the author of Attack of the Theocrats! How the Religious Right Harms Us All – and What We Can Do About It (Pitchstone Press, February 2012). Faircloth, an attorney, served five terms in the Maine Legislature. In 2009 Faircloth became executive director of the Secular Coalition for America, advocating for separation of church and state, and for greater acceptance of nontheistic viewpoints in American life. In 2011 he became the Director of Strategy and Policy for the Richard Dawkins Foundation for Reason and Science. His book, Attack of the Theocrats explores the many ways federal and state legal codes privilege religion in law. Sean says of his book: ‘American society faces creeping theocracy. It is just not a question of what might happen in the future. It is the stark reality of what has already happened. We have a patriotic duty to act. The enlightenment worldview is an ethical imperative. We betray that imperative if we sit on the sidelines. This book is about directly involving ourselves as secularists in changing our world for the better”.

Peter Harrison: (Speaker:Auckland and Wellington)
Peter is a council member of NZARH: Peter joined the Association in 2009 seeking other rationalists. Peter founded the New Zealand Open Source Society in 2002, and was President of the Society until 2007. Peter wants to be active in promoting a secular New Zealand, and to promote open, rational and objective policy in Government. Peter is a promoter of the Secular Education Network. Peter will be talking about the campaign to promote secular education in New Zealand through the Secular Education Network. He will also be speaking about the new Charter Schools legislation and how it will be used to funnel public funds into religious organisations which will be used to indoctrinate children.

Dr Michael Gousmett: (Speaker:Auckland and Christchurch)
Michael will talk about how religion is given special treatment in many areas of society, benefiting from the public purse. Dr Gousmett is an author and presenter nationally and internationally on charity sector issues. His Doctoral thesis is a study of the history of the charitable purposes exemption from income tax. He is a regular contributor to the New Zealand Law Journal and other professional publications; the author on charities in NZ Taxation; and the co-author of a text on charity law and practice in New Zealand (forthcoming 2013). Dr Gousmett is an adviser to charity and non-profit organisations on governance, fiduciary responsibilities, constitution reviews, policy development, strategic planning, budgets and business plans, taxation, financial viability, and financial and management accounting system reviews.

Dave Armstrong: (Speaker Wellington)
Dave is a Wellington playwright, columnist and satirist. His provocative Dominion Post columns on topics including religious education, the Destiny Church, Charter Schools, ‘Wogistan’, and the importance of science has drawn the ire of the religious and conservative right. He has been described by furious trolls as ‘a few cards short of a deck’, ‘nothing but a hack’ and ‘a godless liberal with bleak intolerance.’ Dave’s comedy Kings of the Gym, which had at its heart the Evolution-Creation debate, had successful seasons at Wellington’s Circa Theatre and with the Auckland Theatre Company. Dave also writes the weekly satirical radio sketch show Down the List, which plays on Sunday mornings on National Radio. Dave will take a light-hearted look at religion and the state, and asks if New Zealand is becoming more or less secular. Declining church attendances, Sunday trading, the relaxation of liquor licensing laws and the recent passing of Civil Union and Gay Marriage legislation would suggest that New Zealand is becoming a more secular and tolerant society. But is it really? Are the Christian Right fighting a rearguard action? Why are new age therapies still so popular? And how are recent law changes, especially in education, going to affect our supposedly secular and tolerant society?

Dr. Bryce Edwards (Speaker: Christchurch): ‘The influence of religion on New Zealand politics’.
Bryce is a lecturer in Politics at the University of Otago, and he has a PhD in Political Sociology. Currently in the early stages of his academic career, Bryce teaches and researches in the areas of New Zealand parliamentary politics, elections, political parties, and public policy. He is currently writing a book entitled ‘Who Runs New Zealand? An Anatomy of Power’. He also writes a regular online column for the New Zealand Herald about politics.

Dr.Clive Solomon: (After Dinner Speaker Wellington)
Clive is a Whanganui City Councillor who spearheaded a successful protest against prayers at Council meetings. In March 2012 prayers before Council meetings were stopped. As a Whanganui Hospital Board member, Clive has spoken out against Whanganui Hospital’s Natural Therapy programme, which offered therapies including Maori healing, Christian prayer, massage, reiki and meditation to hospital staff. Clive felt very strongly that the Hospital Board should be paying attention to getting proper standards of care and empathy in conventional Western medicine as “Best practice, evidence-based medicine is the foundation of the scientific practice of medicine. Other modalities might have their place [but] in other areas [and] under different governance.”

Max Wallace: (MC Auckland and Wellington)
Max is Director of the Australia New Zealand Secular Association (ANZSA) will chair these gatherings. He joined the NZARH in 2003 and in 2007 published The Purple Economy: Supernatural Charities, Tax and the State, in 2007.In 2008 he received the Charles Southwell Award from NZARH. In 2008 he promoted the conference “The Secular Heritage of Australia and New Zealand” held in Sydney and Wellington. The papers from that conference were published as Realising Secularism in 2010. He helped bring a 2011 case to the Australian High Court to question the $400m federal funding of religious chaplains in Australian state schools.