A national poster campaign calling for New Zealanders who don’t practice a religion to identify as not religious in the Census on 6 March has been turned down after bus company decided at the last minute to no longer carry any advertising mentioning religion whatsoever.

The campaign is being led by the Humanist Society of New Zealand (HSNZ), who give a voice to the growing numbers of non-religious New Zealanders in public policy and debate on contemporary ethical issues. The series of posters was set to appear on buses and in street advertising from 23 February. 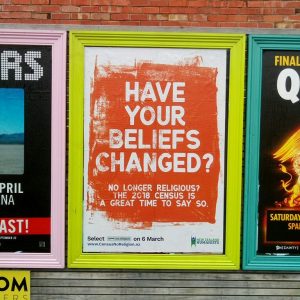 HSNZ worked with the NZ Bus media company in the months leading up to printing the posters to make sure that the campaign fitted within their advertising guidelines. This included discussing the content of the campaign, and allowing the company to approve the artwork before the bus company printed and dispatched the posters across the country.

Sara Passmore, President of HSNZ, said, “NZ Bus changed their advertising guidelines to stop our message from being publicised. It’s a clear act of discriminating against people who are not religious and an attack on our human rights.

“Non-religious beliefs and values are held by a majority of New Zealanders. We know that when it comes to the Census, many people identify as religious because that is how they were raised. This means that policy, services and funding are skewed to favour religions.

“We want to encourage New Zealanders who are not religious to stand up and say so in this year’s Census. But we can’t do it if our advertising campaigns are continually refused”.

High res artwork for the posters can be found here: https://drive.google.com/open?id=1uOyAB-7qpKYpazT_g2y0GZ3x0T2qLMNa

About the Humanist Society of New Zealand

The Humanist Society of New Zealand is the only national charity working to promote Humanism, support and represent the non-religious, and promote a secular state and equal treatment in law and policy of everyone, regardless of religion or belief.

The Humanist Society of New Zealand works on behalf of the 41% (over 1.6 million) of people in NZ who declare themselves non-religious, and who seek to live ethical and fulfilling lives on the basis of reason and humanity.