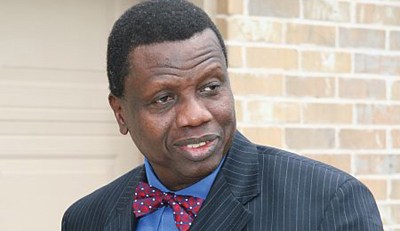 Protest the Visit of a Homophobic Nigerian Pastor to the Pacific Region: Denounce His Gospel Gay Hate and Intolerance

The aim of the tour is to establish branches of the Redeemed Christian Church of God in these places. Pastor Adeboye is one of the pastors who openly used their sermons and preaching to rally public support for the anti same sex marriage bill which was recently passed by lawmakers in Nigeria.

Earlier this year he told a local Christian gathering that ‘Same sex marriage is anathema’ and an ‘evil’ that would lead to the end of human race. Due to the sermons of homophobic clerics like Pastor Adeboye, there is a growing trend of attacks and violence against homosexuals in Nigeria.
We should not allow this vicious trend to spread and take hold in other parts of the globe.
We need to use this opportunity to send a strong message to Pastor Adeboye and other gay bashing African clerics that their gospel of hatred and intolerance has no place in the Pacific Region and that their churches have no future in Australia, New Zealand etc.

Many African churches are trying to re –evangelize the world by promoting literal biblical interpretations and christian messages that are incompatible with universal human rights and other civilized values.

If we must beat back the tide of homophobia sweeping across Africa, we must protest the moves and plans by homophobic pastors and religious bigots to establish churches that incite violence and hatred against gay persons. Let us mobilize through the social media against the visit of this Nigerian pastor. Let us get human rights/humanist/secular groups in these places to stage protests and denounce the establishment of homophobic churches in the pacific region.