The Humanist Society of New Zealand is currently finalizing a manifesto ahead of the upcoming political elections in September. There are many things worth lobbying for, but two that are being focused on are changing the laws around Abortion and Euthanasia.

The first thing the word Abortion brings to my mind is the big red “Abort – Abort Stage” buttons on the console in the Lunar Module that courageous astronauts used to land on the moon. If a landing starts to go sour they have to be on the ball to hit the right button to ascend safely before disaster. 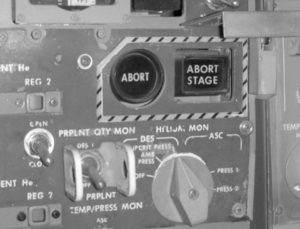 The Abort controls in a Lunar Module.

But even this isn’t a get out of jail free card. While it was never done during the six moon landings, aborting too late could result in the descent stage of the lander impacting the lunar surface. This may cause any remaining fuel and oxidizer to ignite uncontrollably, sending shrapnel flying towards the fragile hull of the aborting ascent stage with the astronauts aboard. And if abortion is needed during the powered descent phase of landing the astronauts must first turn the lunar module around in order for the engine to send the spacecraft safely back into orbit rather than towards the moon.

Now to the point of this metaphor. Some people may be under the impression that opening up the laws around abortion would mean that a woman wanting the procedure would just walk into a booth, do something as simple as hitting a big red button then be on their way.

I doubt any rational thinking person would think that is the way to go.

First, performing an abortion procedure isn’t a simple task like brushing your teeth. It has to be done with the right equipment by a trained professional. In parts of the world where it is illegal the desperate end up turning to dangerous back alley options offered by amateurs looking for a quick buck.

The results are horrendous. Badly done, it is possible for it to lead to the uterus completely shutting down leaving often very young women infertile and with radically altered hormones for the rest of their life. If a yeast infection gets a foothold in such a sensitive area it has the very real possibility of being terminal. Plus someone that went for a dubious and secret abortion would be unlikely to seek out the appropriate treatment, making a dangerous outcome even more likely. Even something relatively minor like scarring can cause long term pain and discomfort.

There are also the psychological ramifications. A doctor has to ensure that the patient is aware of all of the options she has available to get the best possible outcome for her situation. She needs to know what the procedure entails and any potential risks. But most importantly, a doctor would need to be very clear that it is a very serious procedure and to help inform any decisions made so it will not be something she will potentially regret later.

These are challenges, but we do not make the world a better place by only doing the things that are easy. Fully decriminalizing abortion has the potential to reduce child poverty and increase the prosperity and quality of life of women in many walks of life.

And then there is Euthanasia. Specifically, the amendments being sought after are the rights for someone to end their own life in a controlled environment when their situation is terminal to prevent unnecessary suffering.

Many cancers and auto immune diseases can cause a very slow and long death, accompanied by horrific and inescapable pain and fatigue. In such situations it is beyond all reasonable doubt that the person has no potential to recover.

This is a very tricky situation and any amendments to laws would have to be implemented carefully as to not start a slide down a slippery slope towards something dangerous.

There are many scenarios that would need to be considered.

For example, my mother has extreme dementia. She doesn’t recognize anything or anyone, plus she is regularly in pain. Her posture is very bad causing severe back problems and she regularly walks head first into walls and doorways. She has absolutely no prospect for recovery, but her condition means she is unable to give informed consent on anything. Is she completely exempt from any form of euthanasia? Or does such a decision lie with the next of kin, or what is called in this country the Enduring Power of Attorney?

Mental health is something you could say I’ve had dealings with. It often brings to mind someone with a chemical imbalance in their brain. But is it possible for one to have a clear and factual understanding of their life and reach the conclusion that it is intolerable to keep living and there is no likely or even plausible prospect of it getting better? It’s possible that passing a euthanasia law could lead to an increase in suicide. People could justify that their personal life situation is just as hard and painful as someone that successfully seeks euthanasia due to a medical condition.

As humans we implore ourselves with compassion and empathy, not only for our fellow man but extending to the animals that we share our planet with. This should compel us to eliminate unnecessary suffering. While death is something we have evolved over billions of years to avoid at all costs, when the only alternative is horrendous suffering the best option is clear – even if implementing such a law does present challenges that require extensive research and debate to successfully overcome.

If you would like to discuss these issues, you can reach out to me via my personal website or attend one of our meetings held in Wellington on the first Monday of each month.