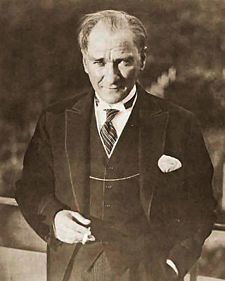 Army officer, revolutionary, statesman, founder of the modern secular Republic of Turkey as well as its first President.

On Wellington’s rugged but accessible south coast on the Miramar Penisula there is a monument celebrating the close ties Mustafa Kemal Atatürk retained with New Zealand after helping repulse their attack at Gallipoli.

Mustafa Kemal Atatürk (May 19, 1881 – November 10, 1938) was an army officer, revolutionary statesman, and founder of the Republic of Turkey as well as its first President.

Mustafa Kemal established himself as an intelligent and extremely capable military commander while serving as a division commander at the Battle of Gallipoli. He later fought with distinction on the eastern Anatolian and Palestinian fronts, making a name for himself during World War I. Following the defeat of the Ottoman Empire at the hands of the Allies, and the subsequent plans for its partition, Mustafa Kemal led the Turkish national movement in what would become the Turkish War of Independence. Having established a provisional government in Ankara, he defeated the forces sent by the Entente powers. His successful military campaigns led to the liberation of the country and to the establishment of the Republic of Turkey.

As the first President of Turkey, Atatürk embarked upon a major programme of political, economic and cultural reforms. An admirer of the Enlightenment, Atatürk sought to transform the ruins of the Ottoman Empire into a modern, democratic, secular, nation-state. The principles of Atatürk’s reforms are often referred to as Kemalism and continue to form the political foundation of the modern (secular)Turkish state.

The Ataturk Memorial is a little demanding. There are carparks at the top of the park and on the coast road below. Both require a steep walk of several hundred metres. The walking surface is good. Wear warm clothes on a cold or blustery day.There is a half-hourly public transport service to Strathmore leaving an extra walk with steep sections to get to the top carpark, about 500m away. There is a very occasional Beacon Hill Shuttle service into Sidlaw Street during peak hour commuter times but not at weekends.

The Memorial is part of the magnificent South-Eastern Walkway with panoramas of Wellington Heads. By devoting at least a half-day to a walk you can arrive over the hills or around the coast and exit at numerous places back onto Wellington’s numerous bus routes, particularly Strathmore (43,44), the airport (91) or Seatoun (11).

Bus: Take a 43 or 44 bus to the top of Tukanae then walk up Sidlaw and down Bowes to the carpark.

Driving: Tricky so use a map. Go up the hills overlooking the airport. You are looking for Sidlaw Street then over the hill top and down Bowes to the carpark. Or drive around the coast, stopping at the small carpark roughly halfway between Seatoun and the airport.

General: If you have good instructions this can be a quick trip, but best is to set aside some time to do the whole area. The site was chosen for its similarity to the Gallipoli Heights. Take time to consider the ANZACS as they landed on beaches and attempted to fight their way onto the tops held by Turkish troops including Mustafa Ataturk.