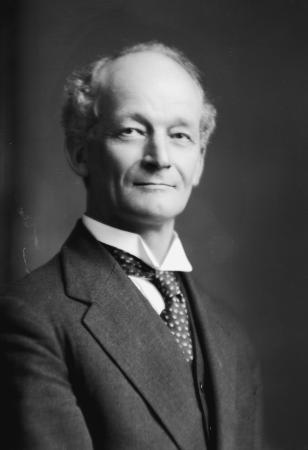 This biographical material is from:

Thomas Bloodworth was born on 10 February 1882 at Maxey, Northamptonshire, England, the seventh child of Ann Jesson and her husband, Thomas Bloodworth, a groom and gardener. He left the village school at 10, and was apprenticed as a carpenter and joiner in Grantham, before emigrating to Christchurch, New Zealand, in 1908. He soon moved to Auckland, where he worked for two years as a carpenter on the construction of Grafton Bridge, at that time the largest single-span concrete bridge in the world.

In 1910 he became active in the Auckland branch of the Amalgamated Society of Carpenters and Joiners (ASCJ). He served as its delegate to the Auckland Trades and Labour Council, and the following year became president of the union. In October 1911 he was elected the first chairman of its Auckland district council. He also became active in the lively Auckland branch of the New Zealand Socialist Party. He was appointed its supervisor of literature, and was a regular contributor to the New Zealand Federation of Labour’s journal, the Maoriland Worker. The ASCJ was a conservative organisation, however, and despite Bloodworth’s efforts, it refused to affiliate to the militant Federation of Labour.

He met Rhoda Alice Aspin at Socialist Party meetings and married in Auckland on 28 February 1912. They visited England briefly and returned expecting Tom to start his own carpentry business, but when the waterfront and general strikes broke out in late 1913, Bloodworth became chairman of the Auckland strike committee, and at the height of the strike led a temporary takeover of the ASCJ’s office in an attempt to force the carpenters into more militant action. By the end of 1913 Bloodworth was an executive member of the United Federation of Labour (UFL); the ASCJ, however, again refused to affiliate.

Bloodworth patched up his differences with the ASCJ and became a paid district organising secretary. From 1918 to 1920 he served as president of the UFL. In 1921 he was elected secretary of both the Auckland branch and district council of the ASCJ; he combined these roles with spells as secretary of its Otahuhu and Hamilton branches.

Bloodworth had an enormous capacity for work, and played a leading role in trade union conferences on the arbitration system in February and March 1928. He also maintained close links between the ASCJ and the New Zealand Labour Party, believing that political action offered the best prospect of improvement for workers. When attendance at union meetings waned he did much to halt further decline, and willingly accepted lower wages for himself during the depression of the 1930s.

Tom Bloodworth also worked in local and community affairs. He was prominent in the Workers’ Educational Association in Auckland from its formation in 1915, served as vice president of the single tax Auckland Land Values League, and was active in the League of Nations Union of New Zealand. He first stood, unsuccessfully, for the Auckland City Council in 1915. In 1919 he was elected to the Parnell School Committee, and later that year, along with Michael Joseph Savage, was one of three Labour Party candidates elected to the city council. He was immediately appointed the council’s representative on the first board of managers of Seddon Memorial Technical College. Except for a break in 1927–28, Bloodworth served on the Auckland City Council continuously until 1938, topping the poll in 1925 and 1929. He stood for the mayoralty under the Labour banner in 1927 and 1929, on both occasions polling well but unsuccessfully. During the latter contest, the ASCJ donated – against his wishes – £100 to his campaign fund.

Bloodworth’s personal qualities, intelligence and increasingly moderate views quickly made a favourable impression on the conservative leadership of the council and led to his appointment to other local bodies. In his final year as chariman of the Auckland Harbour Board in 1938 he officially welcome the commanders of flying boats on their inaugural flights to New Zealand.

Bloodworth was a strong advocate of local government reform. In 1919 the Labour Party’s municipal policy had included the introduction of proportional representation and the creation of one metropolitan authority in Auckland. During the 1920s he supported reorganisation based on ad hoc boards, and in 1928 he unsuccessfully pushed for the establishment of a multi-purpose board of works.

While Bloodworth’s career in local politics flourished, his attempts to secure a seat in Parliament were repeatedly frustrated. As Labour candidate for Parnell in 1919 he polled over 2,000 votes, but lost. He failed to gain the Labour nomination for Eden in 1926, and then came third in a by-election in Parnell in 1930. By then, however, Bloodworth’s independent spirit was straining his commitment to Labour. His acceptance of government appointments, to the Workers’ Compensation Commission in 1930 and to the Legislative Council in 1934, was widely criticised in labour circles. He broke with the Labour Party in 1930, and in 1935 was narrowly ousted as secretary of the Auckland branch of the ASCJ. The following year his connection with trade unionism ended when he agreed not to stand again as Auckland district secretary.

In 1953, at the age of 71, Tom Bloodworth began a remarkable second career in local politics. Standing on the ticket of the conservative Auckland Citizens’ and Ratepayers’ Association, he was re-elected to the Auckland City Council, which he served in a variety of rolesl for a further 15 years, topping the poll in 1962.

Tom Bloodworth was made an OBE in 1966 and retired from civic life in 1968, at the age of 86. He died at Remuera, Auckland, on 11 May 1974, survived by his wife, Rhoda, who died in 1980. Their only child, William, had died in 1967. A committed rationalist and lifelong teetotaller, Tom Bloodworth abhorred empty rhetoric and factionalism; he disavowed the Labour Party but never its principles, and claimed that he had always fought for ‘peaceful revolution’. An unpretentious and pragmatic figure, he was nevertheless a determined advocate of social justice, and worked tirelessly to develop and improve Auckland’s civic institutions over half a century

Directions: The suburb of Remuera is an inner city suburb of Auckland, a short trip out of town heading south. Drop down towards the Remuera foreshore and you can’t miss Thomas Bloodworth Park on the sea front.
Busing: Easiest is to take public transport to Auckland centre and transfer to a Remuera bus. A short pleasant walk takes you to Thomas Bloodworth Park.
Car:The main road south from Auckland centre exits over the rise towards Newmarket. Finding Remuera is easy from here.
Walking: Too far to walk from Auckland centre for all but the very keen, however once in Remuera there are many interesting sights and sounds as you stroll to and from the park.