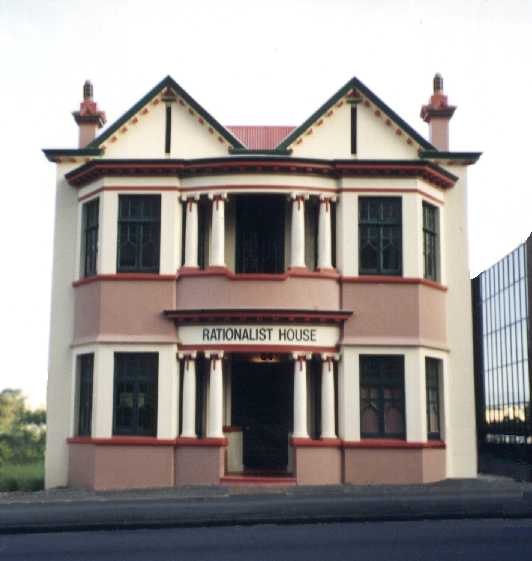 The purchase of Rationalist House in 1960 followed 16 years of saving and bequests. Read the full story of financing and buying Rationalist House on http://www.nzarh.org.nz/rathouse.htm
Within four years the Association had freeholded the property. The securing of a permanent headquarters was a remarkable achievement that few freethought organisations have matched.

At last there was a permanent home for the massive library of the Association, including the large collections donated by William Brabant and Sam Udjur in 1951 and 1953 respectively.

Starting in 1994 a series of restorations and improvements transformed the building from a state of disrepair into its present fine condition. In 1997 Rationalist House was declared a Heritage Site by the Auckland City Council. In 1999 the basement underwent major renovations and now houses the Len Beckett Memorial Library, one of the premier collections of rationalist literature in the world, and well worth a visit.

You can visit Rationalist House during normal office hours, and if you time it right you may be able to view the library. There is also a rented section with a private tenant.

Walking, Busing or Driving: Rationalist House is easily identified in a major central street of Auckland. Queen Street is the heart of Auckland, and offers a pleasant walk to Symond Street, but the elderly and infirm are warned of steep roads and larger than usual distances between them. An easy and attractive option is to take public transport into Central Auckland and change to the inner city ‘Link’ buses that circulate the central business area and travel along Symonds Street. Or you can find a car park at a price, but still expect an uphill walk.

Auckland drops towards the Waitemata Harbour. There is a pleasant walk of about 50 minutes from Queen Street past the Art Gallery and Albert Park to Symonds Steet and then down the hill returning to the bottom of Queen Street.