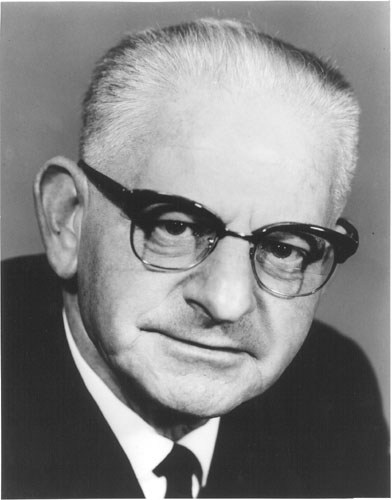 One of New Zealand’s most popular and colourful local politicians, Dove-Myer Robinson was the longest-serving mayor of Auckland city, holding office for 18 years between 1959 and 1980. He was born Mayer Dove Robinson on 15 June 1901 in Sheffield, Yorkshire, England, the sixth of eight children of Ida Brown and her husband, Moss Robinson. His father described himself as a master jeweller, but actually peddled trinkets, as well as dealing in second-hand furniture. The family were poor and moved house often, and his mother imposed the strict values of her rabbi father. At each new school he was the target of anti-Semitic bullies who forced him into fights.

In 1914 the family emigrated to Auckland, where his father worked as a pawnbroker. Robinson found New Zealand warm and clean, and his school free from violence. He left Devonport School at 14 and became a message boy, and then a travelling salesman. Preferring his second name, he began calling himself Dove-Myer. He also rejected Judaism, becoming a lifelong atheist.

On 12 September 1924, in Gore, Robinson married Adelaide (Adele) Elizabeth Matthews, who worked in her mother’s hotel in the Southland town. They were to have two daughters. Tired of travelling, he returned to Auckland to manage his father’s business, and began to sell new and second-hand motor cycles. In 1930 he set up Robinson’s Motor Cycle and Bicycle Depot, and for a time he was a sidecar racing champion. His business struggled during the depression, but later expanded to include cars. The Robinsons divorced in 1932, and on 7 December 1937 he married 17-year-old Veda Alice Davis in Auckland; the marriage lasted only a month and they divorced in 1940. By this time Robinson was living with Bettine (Betty) Williams, a seamstress, who on 15 March 1941, in Auckland, became his third wife. They were to have two daughters and a son. Exempt from war service because of impaired eyesight and back injuries sustained in motor-cycle racing, in the 1940s he built up a manufacturing company, Childswear Limited, with Bettine, and became a wealthy man.

Dove-Myer Robinson became active in Auckland local politics in the mid 1940s as an opponent of the proposed Brown’s Island sewerage scheme, which would have pumped raw sewage off the island into Auckland’s Waitemata Harbour. A slight, bespectacled man whose tiny stature was offset by a booming voice and massive ego, Robinson was a natural political campaigner. He won an Auckland City Council by-election in 1952 and formed the United Independents, who seized control of the Auckland Metropolitan Drainage Board in 1954. In a stunning reversal for the city’s political establishment, Robinson implemented his own sewerage scheme, sited at Mangere, on the Manukau Harbour, which used revolutionary oxidation ponds pioneered in California. A clean Waitemata was probably his greatest legacy.

While this lengthy political struggle established Robinson’s public profile, it contributed to the failure of his third marriage. A divorce was issued in 1959, and on 15 June that year, in Auckland, he married Childswear executive Thelma Ruth Thompson; they were to have a daughter.

His sights were now on the Auckland city mayoralty. Campaigning as ‘Robbie’ on a populist platform, in 1959 he defeated the incumbent Auckland Citizens’ and Ratepayers’ Association mayor. Another defeat for the conservative political establishment, it would not be forgiven. During his first two terms there were continual clashes between the mayor and the association councillors. They could not bear Robinson’s political popularity and some found his working-class origins, his many marriages, his flamboyance and his Jewishness repellent.

As mayor, Robinson proposed a major reform of greater Auckland’s 32 separate city, borough and county councils. He wanted a regional authority that could alone decide issues of metropolitan importance, and looked overseas to two-tier structures in Toronto and Miami. He wore down borough mayors opposed to the reforms, and artfully exploited demands by Parliament’s local government select committee for compulsory council amalgamations. Reluctant mayors agreed to accept a top tier as long as their councils were left intact. The Auckland Regional Authority (ARA) was established in 1963 with Robinson as its founding chairman; he had introduced regional government to New Zealand.

In 1965, however, he suffered a series of setbacks. Thelma had insisted on only two terms as mayoress, but Robinson wanted to continue, and the marriage disintegrated amid public scandal (the couple were divorced in 1969). The Citizens’ and Ratepayers’ and the New Zealand Labour Party saw an opportunity and ran mayoral candidates; the Labour contestant split the vote and Robinson lost. Denied any position of responsibility on the ARA, and now a single parent, he endured a three-year political hiatus.

He returned to power in the 1968 mayoral election, securing majorities across the city. He developed a happier relationship with new Citizens’ and Ratepayers’ councillors, and his niece Barbara Goodman became mayoress. Four more terms followed, and he was knighted in 1970. His flair for publicity, which included a 1972 appearance on the BBC television programme ‘Whicker’s world’, taking his trademark shirtless walk to work, both shocked and delighted. He was associated with a host of local causes and nationally became Auckland’s most recognisable spokesperson. Robinson also lent his name to incipient green politics, supporting the Labour government’s opposition to French nuclear testing and attending the United Nations habitat conferences in Stockholm (1972) and Vancouver (1976).

In 1968 his regional career was also resurrected with his appointment to the ARA transit committee. He advocated rapid rail for Auckland, but ARA chairman Tom Pearce and many members opposed the expensive scheme. In 1973–74 the Labour government reneged on an election pledge, which Robinson had secured, to pay for the scheme. His predilection for lone campaigning was ultimately a costly political weakness. Isolated on the issue, he lost the opportunity to implement a long-term solution to Auckland’s transportation needs.

Although Robinson’s regional influence declined in the 1970s, he retained a strong following as mayor. After his 1977 victory he promised not to run again. In 1980 he recanted, but old age was against him and he lost. Distant relationships with most of his children made his reluctant retirement lonely, and attempts to regain office in 1983 and 1986 were failures. He died on 14 August 1989 at his Remuera retirement village; he was survived by his six children.

Dove-Myer Robinson was a rare figure in his day. Political independent, environmentalist, sometime solo father, passionate organic gardener, rugby league fan, and lifelong advocate of vitamin pills and alternative medicine, he would have been more at home in the 1990s. He was one of the first local politicians to exploit the visual media, and his personal style of mayoralty has been emulated throughout New Zealand.

Walking, Busing or Driving: Dove Myer Robinson Park is visible in the map on Gladstone Road.